These two cards were CASE'd from Denise Ireland, yet another OWH cardmaker, using the same Disney paper as my other character card kits.

On the Donald Duck card I used a little strip of patterned paper from some really old Disney paper I bought a loooong time ago.  The sentiment came from a Hero Arts clear stamp birthday set.

On the Pluto card the patterned paper came with a Disney album I bought to scrapbook our trip to DisneyWorld which I called "4 Parks in 4 Days with a 4 Year Old."  Yes, it's true - by myself in August no less!  My husband had business in Florida and thought it would be a good opportunity for ME to take Kaylie to DisneyWorld - HA!  We did have fun though.  :-)  On this card I also used my Cuttlebug Traffic Jam embossing folder, my Nestabilities scalloped circle die and a free sentiment from Operation Write Home which can be found here along with many other free images. 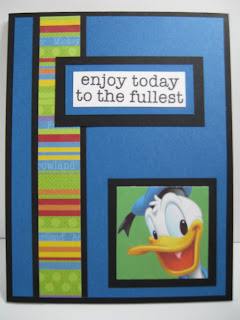 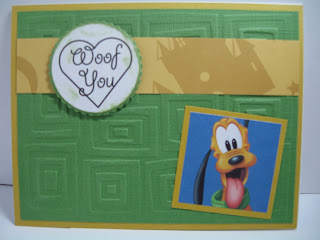