This week the folks at Hambo Hoedown sent us (those of us who played along last week, that is) this cute digi called Pig Sub.  The challenge was to make a card for Operation Write Home.  As my 8-year-old daughter says, "Easy Peasy Lemon Squeezy" since almost every card I make is for Operation Write Home.  They always need general themed cards that can be used throughout the year, so I decided to pair this underwater piggy with Echo Park Splash paper and a thank you stamp from Stampin' Up which I thought completed the Hambo sentiment perfectly.  I wanted to make a Yellow Submarine and when I showed that 8-year-old daughter of mine the card, even she broke out into song.  How did she know about a song that was released when her mommy was just 3 years old?! 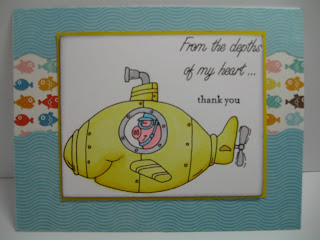