I was thrilled when Laurie at Doodle Pantry asked me to create a project using the Texas Star new release, the first in a new line of state-inspired digital stamps.  Why did she ask me?  Because she and I are both Texans - who else would want to create a Texas-inspired card?!  I love this new digi stamp set because not only did Laurie design the Texas Star but she separated all of the elements out and gives you those images as well.  Check out what I did with them! 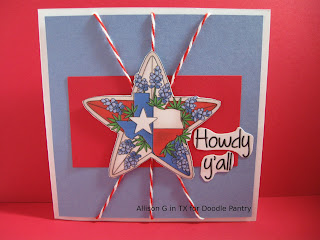 On this card I used the whole pre-colored Texas Star image along with Deconstructed Sketch #54.  The sentiment is also part of this fabulous set. My card is 4.25 x 4.25" so it still fits into a standard envelope. The twine is from We R Memory Keepers and the blue cardstock is SU! Brocade Blue. 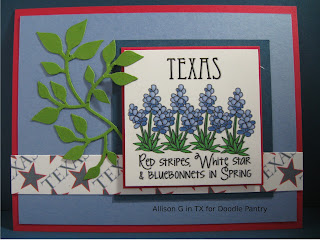 I love bluebonnets - they make me think of my grandmother because she loved them so!  This time I wanted to show you how versatile this set really is.  I used the separated out element of the pre-colored bluebonnet and copied it several times.  Again, the sentiments are part of the Texas Star set.  The patterned paper is from Doodle Pantry's Texas set.  I used OWH Stars & Stripes sketch #56 and the Sizzix branch with leaves die to fill in the empty hole to the left of the image.  The card stock is Midnight Muse and Brocade Blue from SU! and red from my stash.

Doodle Pantry has very reasonable prices and great specials.  In fact, until April 17 you can save 45% on your entire order AND get a newly released set free with purchase. What are you waiting for?  It's time to go shopping! Don't forget to play along in the monthly challenge with your newly purchased goodies and get another set free just for playing along PLUS a chance to win a gift certificate.  The challenge deadline is April 24.
Posted by AllisonG at 5:30 AM