Cards with Images Colored by Kaylie

Remember I told you that my 8-year-old daughter was getting into the act by coloring my images.  Well, today I have 4 cards for you with images that SHE colored!  Tomorrow she will take some time off from coloring to attend her favorite summer event: The Texas Scottish Festival.  She loves to learn the Scottish country dances, listen to the bagpipes, and do the kids' crafts!  Funny, huh?!

First is an image from Bugaboo Stamps.  I used OWH S&S Sketch #33, American Crafts paper and my white Viva Pearl Pen to make the dots. 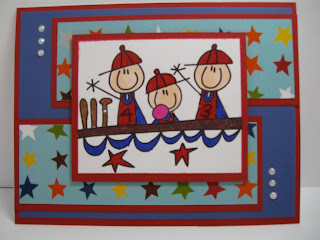 Next is the Sumo digi from Hambo Stamps.  For the challenge I used the sentiment "Wishing You a Ton of Happiness," but she really liked "Sumo-body Loves You" so I let her color another image and made a card with her preferred sentiment.  I used the same patterned papers I did on my cards for the Asian feel as well as the oval and oval scalloped Nestabilities for the sentiment. 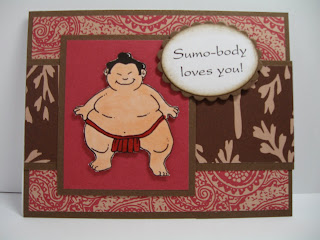 The third card is a cute Ladybug image from Designed to Delight paired with an adorable sentiment from TLC Creations.  I used OWH S&S Sketch #40, cardstock and black ric rac from my stash and my black Viva Pearl Pen.  I don't think I let the pearl pen dry enough before I moved the card, so they don't look very even, but I'm practicing and learning.  Still love Viva Pearl Pen! 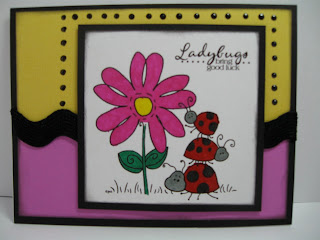 The last card in this series of colored images by Kaylie uses an image AND sentiment from TLC Creations.  Because my daughter ONLY likes green grapes, she insisted on coloring them green.  I'm least proud of my paper choices and color combos on this card, but it is what it is - sometimes it happens that way, right?  I used OWH S&S Sketch #49, American Crafts paper for the yellow and the strip with flowers and the dotted paper was in my scrap stash with no company name.  I used a scalloped rectangle Nestabilities around the image and lots of distressing inks. 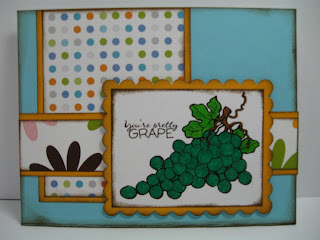