I have really enjoyed playing along with all of the Something For You To Try sketch challenges at iheart2stamp.com this year.  I was so sad when Jen announced that she will not be continuing the challenges in 2013!  So, here is my final SFYTT submission (boo hoo!) - a birthday card in honor of my daughter Kaylie's 10th birthday (We're at Great Wolf Lodge today celebrating - her birthday is December 30).  Below you will find the links to every entry in 2012 which makes me eligible to win the grand prize - gift certificates from every sponsor this year.  There are super sponsors on the list so I hope I win - WOOHOO!

I love Jen's sketches and have looked forward to the first Saturday of every month this year.  I will be sad in 2013 but will keep my fingers crossed that she may revive the SFYTT challenges in 2014! 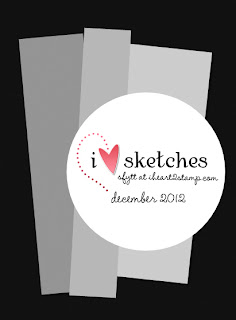